Things are looking pretty good weather wise over the next few days. Although there’s a good bit of rain in the forecast, temps in the high 50’s and low 60’s over the next week means we’ll stave off winter a little longer. 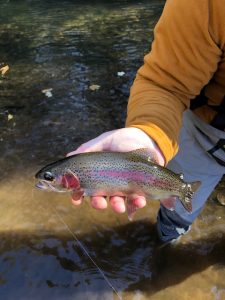 Flows on the Clinch have not been favorable for wading the past couple days and that may narrow with the expected rain. The Clinch is doing much better on the upper end, and the fish have been feeding actively when there is a window of opportunity.

The Holston has been much better for wading, and that with better water temps has been well received. Pheasant tails or other size 16 or 18 nymphs should work, and it wouldn’t hurt to throw some streamers or swing wooly buggers during the overcast days that we have coming up.

Smallmouth fishing has remained pretty good in the wake of the frigid temperatures last week. According to our friend Chris, smallmouth have been taking shad patterns slowly stripped over darker color gravel (which warm faster in sunlight than light colored bottoms) in depths of about 5-7 feet.

Chris ties his own flies for smallmouth, but bought a Shad streamer that Andrew Smalling tied. That pattern is a part of a new fly section that we’re building up, that showcases the patterns we’re using to fill up our boxes this time of year.

As for the mountains, the fishing has been good in the late morning and early afternoon when sun has been on the water. If it’s not, it can be pretty tough to elicit a take. Rubber-legged nymphs have seem to do well in addition to orange caddis.