Rain is back in the Tennessee Valley, but that hasn’t meant bad fishing. Earlier this week, the Holston was facilitating test sluicing, but are now offering a pulse schedule with good wading opportunities. The Clinch was also running big water earlier this week, but has been giving up some good flows today and tomorrow before think weekend’s Rec schedule.

On the Clinch, your standard midge patterns have been performing well, but olive and red seem to be best. Small wooly buggers are working well on stocked trout, as they always do, around Millers Island. Folks are catching good fish with foam beetles and even sulphurs during the afternoon, though the sulphurs won’t be very active with the predicted rain.

For the Holston, pheasant tails in size 16 or 18 have been extremely effective. With the rain, the temps aren’t rising as sharply as they were during last week’s heat wave. Check water temps as the morning turns into afternoon, but you may have longer hours of trout fishing than normal.

Smallmouth fishing on both the Holston and French Broad have been good. We’re not seeing as much topwater action during the day as we usually do during this year, but the streamer bite has been hot. For topwater action, just go early or late and cast up against the banks.

Speaking of warmwater, we’ve had a lot of lake fisherman in that are doing really with poppers, sliders and hairbugs cast against shady banks. All of the reservoirs are at a great temperature, and bass, redears, and other species are feeding heavily.

The mountains have been doing super well. In fact, a couple students from our Fly Fishing 201 caught their first wild Smoky Mountain trout in the past week. One is a young ad account manager at WVLT (pictured below) and our new friend Chad, who toasted his first fish in the shop with a fine bottle of Weller 12 Year. Though out of plastic cups around noon on a Tuesday, it felt just as reverent as if we were streamside with him.

As for tactics, anything yellow is still doing really well, especially in the higher elevations. We’re also in the middle of terrestrial season, so foam beetles and flying ants are working well. For nymphs, copper johns or a hare’s ear are reliable choices for this time of year.

As mentioned in the last couple emails from the shop, we’re now offering Fly Fishing 201 classes for those who are hip the basics of fly fishing, but want some on the water instruction. The cost is $100, and you get two hours of time on the water to learn the basics of reading, nymphing the water, and how to interpret the TVA generation schedule. We have a few openings for this weekend (July 20th) and next (July 27th), so email charlie@www.3riversangler.com to reserve your spot, and read more about it here. 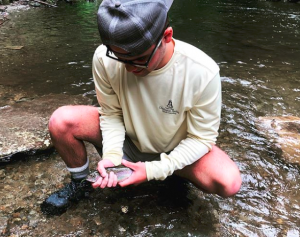